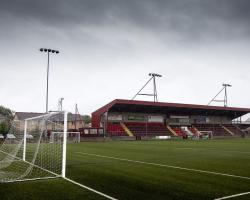 Greater Manchester Police had launched a search for the 19-year-old after he went missing while celebrating the new year with friends in the city.

Police found a body late on New Year's Day in Longworth Street, where the Scottish League One club's player had been with friends at Suede nightclub.

Stenhousemuir chairman Bill Darroch said in a statement: "I am extremely saddened to have to report that one of our Under 20s team players, Kyle Doherty, has been found dead following a night out in Manchester.

"We are all devastated by this news and our immediate thoughts are with Kyle's family and friends at this sad and difficult time.

"Kyle was a talented footballer and had been a part of Stenhousemuir Football Club since signing for us in July 2013.

He will be missed by all who knew him.

"The entire club is in shock at this most terrible of news and we offer our deepest condolences to Kyle's family and friends."