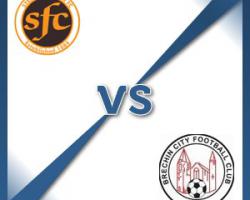 Stenhousemuir V Brechin - view commentary, squad, and statistics of the game live.Millar's a wounded WarriorStenhousemuir are without Kieran Millar due to illness when they host play-off seeking Brechin at Ochilview.The Warriors sit in the safety of eighth place courtesy of having a one goal better goal difference than Ayr, with manager Brown Ferguson looking for his side to build on a strong finish against leaders Stranraer last weekend.Ferguson said: "We were three goals down at Stair Park, however we rallied well and grabbed a couple back."If we can play for 90 minutes as we did for most of that second half then we have a chance against a Brechin side who have a lot to play for."Brechin will be without Gerry McLauchlan, who has a calf injury.Meanwhile, a lack of match fitness following a knee injury will keep Callum Tapping on the bench.A point will ensure a second crack at promotion for the Glebe Park men, and manager Ray McKinnon said: "This is a huge game for us and a huge game for Stenhousemuir

We need to get a point, however we will be going out to win the game with a lot of confidence after wins over Morton, Stirling and Dunfermline."To reach the play-offs for a second time in three years would be a great achievement, however it will be tricky."