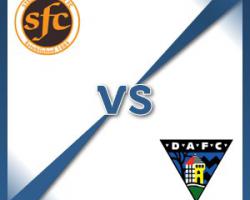 Stenhousemuir V Dunfermline - view commentary, squad, and statistics of the game live.Ferguson's Warriors depletedStenhousemuir continue their battle to avoid relegation against Dunfermline at home without injured pair Ross McMillan and Bryan Hodge.McMillan is struggling with a back problem and Bryan Hodge has been ruled out due to a calf strain.Warriors' interim manager Brown Ferguson said: "We built on our two recent wins with a point against Ayr last weekend."It was a good point to get, however it was achieved with a very resilient defensive performance and I'm hoping that we will be seen more as an attacking force in this game."Dunfermline are a side full of good players and this will be an extremely tough test for us as they still have ambitions to be in the play-offs."The seventh placed Pars have Alex Whittle available after a knock however a pelvic problem keeps Ryan Wallace out.The East End Park side, who sit 6 points off fourth place, need to start winning games consistently to force themselves into the play-offs starting at Ochilview with manager John Potter saying: "We simply have to get three points on board from every game and see where we end up

We cannot afford not to win and we face a real challenge to do so at Stenhousemuir as they have done well under Brown Ferguson."In saying that what our players do will determine the outcome of this game."