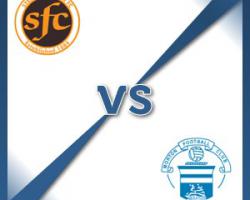 Stenhousemuir V Morton - view commentary, squad, and statistics of the game live.Greacen blow for StennyStenhousemuir will be without Stewart Greacen against one of his former clubs Morton.The defender misses out due to a knee injur, however the Warriors have added midfielder Lee Gallagher from Partick.Scott Booth's side defeated the Greenock men earlier in the season and the Ochilview manager is determined that they do so again.He said: "It was disappointing to lose last weekend to Stirling Albion after doing so well and winning at Stranraer the week before."We never got going last Saturday, however I am sure that we will be ready for Morton and a repeat of our 2-1 win over them would be very welcome."Morton have added goalkeeper Grant Adam to their squad until the end of the season as Derek Gaston continues to be absent with a thigh strain and Nico Caraux remains out with a groin problem.Top goalscorer Declan McManus has returned to Aberdeen at the end of his loan spell and with both Andrew Barrowman and Stefan McCluskey carrying knocks manager Jim Duffy could be short of attacking options.Duffy said: "It was obviously disappointing to lose to Airdrie last weekend however there were periods in the game that were acceptable