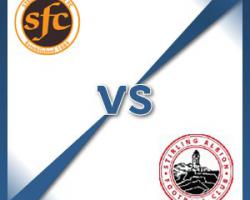 Stenhousemuir V Stirling - view commentary, squad, and statistics of the game live.McMillan back from banStenhousemuir welcome back skipper Ross McMillan from suspension as they look for revenge over visitors Stirling Albion for a 5-4 defeat at Ochilview earlier this season.Stewart Greacen remains out with a knee injury and Martin Grehan has still not fully recovered from a back injury with manager Scott Booth hoping to hear positive news from Rangers over his request to extend the loan deal of Tom Walsh.Booth said: "We had a great performance and win at Stranraer last weekend

I want us to build on that by seeing off Stirling and finally getting over that horrible home defeat as it was a game we should have won."Bottom of the tableAlbion will have Greg Paterson in goal as Callum Reidford is suspended following his red card in the 4-3 defeat by Morton last Saturday.Darren Smith misses out with a knee injury as the Forthbank men look to end their habit of losing late goals.Assistant manager Martyn Corrigan said: "We have seen a lot of improvement since the manager Stuart McLaren and I came in, but in the last three games we have lost late goals that have cost us points."If we get ahead at Stenhousemuir we are looking for the players to show that they have the right mentality to handle it."