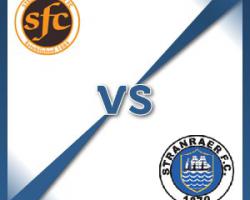 Stenhousemuir V Stranraer - view commentary, squad, and statistics of the game live.Marenghi worry for StranraerStenhousemuir will give Anthony Marenghi until close to kick-off to prove his fitness ahead of the visit of Stranraer.Marenghi suffered a head injury against Brechin at the weekend and is a doubt to face his former club.Interim manager Brown Ferguson said: "We were playing well at Glebe Park, however when the incident with Anthony and one of their players happened we seemed to lose our way and ended up losing 2-1."We have fallen further behind Ayr United which is disappointing, but we are by no means out of anything

The last time we faced Stranraer we were able to beat them 2-0 and we can take confidence from that into this clash."The League One leaders from Stair Park will again be without Scott Rumsby, who has an ankle injury, with Steven Bell unlikely to be risked on the artificial surface at Ochilview due to an Achilles problem.The Blues were in blistering form on Saturday as they defeated Dunfermline 5-1, however, manager Stephen Aitken reckon that the Warriors are the perfect opponents to keep his men grounded.Aitken said: "We played really well and the players should be proud of that performance."Stenhousemuir deservedly beat us just after Christmas so we know that we are in for a tough evening if we go in thinking the game is already won."